A bit of a departure from the usual electronics/software based post, but a writing about learning nonetheless.

This week wrapped out the school year for us and our kids.  Our kindergartner had quite the gainful first year of “official” school.  Rather than trying to finish up our science study on The Brain and The Senses, we instead built solar ovens as the last lesson.  They’re always the next year to pick back up where we left off. 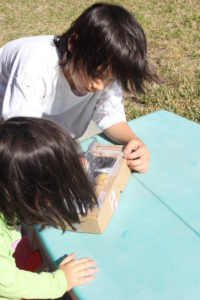 The “lab instructions” that I put together in <15 minutes the night before basically called out materials including a box, black construction paper, plastic food wrap, and aluminum foil and directions on assembly.  Following was a basic “what do you expect” and “what happens” fill-in when shining the sunlight into the “oven”.

It was ~77F outside in the sun.  The oven’s interior temp got up to near 100F within minutes, not bad for no consideration of insulation or other potential optimizations.  The kids were quite impressed that the cheese started melting.  They also couldn’t wait until next day to “toast” marshmallows. 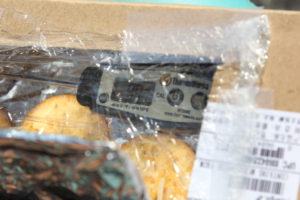 The casual conversations into the evening afterwards was vindication that it was worthwhile to do this really, really basic experiment.  –The same experiment I read and followed along years ago IIRC from a Fox Kids Club magazine..yes I’m dating myself here.

AJ started scheming up other ways to make “ovens”, after understanding how the one he just built conceptually operates.  One of his ideas for another “solar” oven was using a light bulb, which I had to nudge that it wouldn’t be a direct solar design as it would need electricity.  It is interesting that he mentioned using a light bulb: it must be intuitive that bulbs generate heat, so much so that there used to be a commercially available toy built on that premise.  However, in his short years of life he’s probably only ever seen CFL and LED bulbs in use, as incandescents have fallen out of favor due to higher energy usage, working against the A/C trying to keep the rooms cool.

This kind of creativity and ingenuity isn’t necessarily a directly teachable thing, but kinda builds from within from exposure and otherwise nurturing experience.  Its such an important trait that we impart on our future leaders and innovators that we can’t lose sight of.  But I sometimes think in our (the parents and educators) quests of trying to get our kids to eventually learn the most advanced skills they can absorb in their young learning years, its quite easy for ingenuity to fall out the wayside.

STEM is a big catchy thing these days for various reasons, and if/when done correctly I believe the attention can yield great results that everyone will appreciate.  When discussions turn quickly into action plans like putting every kid starting from pre-k in front of a computer with a software IDE, maybe we should step back and consider its not all “what” they’re learning, but “how” and “why” counts as well.

And with that, SCHOOL’S OUT …FOR SUMMER!  Maybe I’ll have a few spare moments to finally build out more of the Embedded Systems 101 workshop.